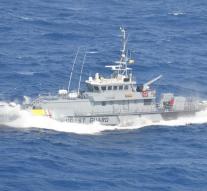 oranjestad - The Caribbean Coastguard Tuesday twenty illegal Latinos from sea picked up near the Aruban coast. The migrants tried unseen by speedboat to reach the island.

It involves people with a Venezuelan, Colombian and Peruvian nationality. The captain and a crew member on arrival at a port Aruban arrested on suspicion of smuggling, reports the Coast Guard.

Late Tuesday night discovered the radar of the Coast Guard Support Centre in Aruba speedboat south of Baby Beach. The beaches on the southeastern tip of Aruba are popular with smugglers. A Coast Guard cutter and a superrhib managed to intercept the unknown vessel. 'The action was completed just after midnight,' said spokeswoman Maartje van der Maas.

It regularly happens that knows how to intercept the Coast Guard in the Caribbean part of the Dutch Kingdom transportation of illegal migrants. In particular, the distressing situation puts Latinos in Venezuela to achieve the prosperous islands.