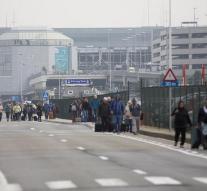 brussels - All the victims of the attacks in Brussels last March have left the hospital. The last wounded could go home on February 15, Wednesday became apparent.

Stay still some people in a rehabilitation center. Furthermore, there might be returned, for instance to place a prosthesis some victims.

The attacks on March 22 claimed 32 lives, in addition to the three terrorists who blew up sixteen at the airport in Zaventem and sixteen Maelbeek Metro Station.

Of the 324 wounded came to the hospital, knew 29 to do so on their own. The rest was taken by the emergency services. They are nursed in 54 hospitals. One hundred people were already within 24 hours at home, according to a survey by the Ministry of Health.

Health Minister Maggie De Block voiced Wednesday sharply criticized the insurers, which, according to her much too slow with the payment of compensation to the victims. Less than 15 percent of the estimated damage is compensated and only 18 percent of claims are fully covered, she said in parliament.

' Not normal 'and ' ontolereerbaar', the judgment of the minister was. ' Through this administrative rigmarole and so long to wait, these people have a second victim. '

Tuesday showed that Australian insurers 136 million are earmarked for victims of the attacks in Brussels. This sum actually paid only 16.5 million euros.