Home / World / 'Last attack' on IS in eastern Syria 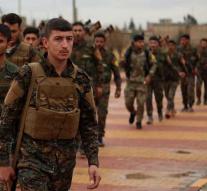 US President Trump said last week that he might soon report that the last territory of IS has been recaptured and the caliphate is definitely coming to an end. Trump announced in December that he is going to recall the 2000 US military.

The SDF, controlled by the Kurdish militia YPG, has largely managed to dispel IS for the last four years from the north and east of Syria.