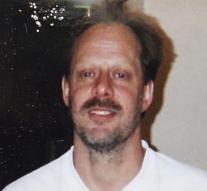 - The man who caused a massacre in Las Vegas, Stephen Paddock, on Sunday evening, was given medication as a result of fear in the summer. On June 21, he received fifty ten milligram tablets of diazepam, known as valium, according to the Las Vegas Review Journal.

The prescription was written by doctor Steven Winkler. His office did not want to answer questions from the newspaper. Paddock bought the medicine in a Walgreens in Reno.