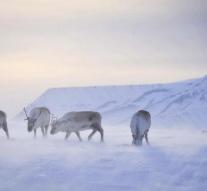 - The largest herd of reindeer in the world has decreased in number by 40 percent since 2000. So say scientists after study presented Monday at a meeting of the American Geophysical Union (AGU).

The researchers say that the animals that live on the Taimyr Peninsula in Siberia, suffering from rising temperatures and human activities. This forces the reindeer to change their annual migration.

'There is a substantial decrease and this we see in other wild reindeer in other parts of the world. The herds take drastically in numbers, 'says Andrej Petrov from the University of Northern Iowa and one of the researchers.

The Taimyr herd is one of the most monitored groups reindeer in the world. The animals are almost fifty years monitored by scientists. The population peaked at one million animals in 2000, but according to the latest figures, there are only about 600 000 reindeer.

'Climate change is certainly an important factor in that decline,' said Petrov.