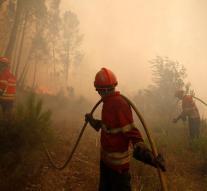 avelar - Firefighters wiped out the main fire place in Portugal on Wednesday. According to the authorities, there are some smaller places where fire is raging in other areas, but the worst suffering seems to be happening.

The biggest fire occurred on Saturday, probably due to a lightning strike. The fire spread sharply. Due to the various fires, a total of 64 people died. Aid workers carried more than 150 wounded to hospitals.

The largest disaster area is about 200 kilometers northeast of the capital Lisbon. It was the biggest fire ever raging on the Iberian Peninsula. Presumably, over 40,000 hectares of forest have been destroyed by the fire.