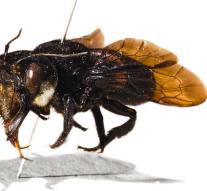 paris - The largest bee species in the world, the Megachile pluto, has been observed again after almost 40 years. That happened in a remote area in Indonesia, researchers say.

The so-called 'flying bulldog' was last seen in the wild in 1981, says the Global Wildlife Conservation. The researchers have now succeeded in detecting the creature again. The specialized photographer Clay Bolt calls it 'unbelievable' to see in real life how beautiful and big this species is. 'Also the sound of the' huge wings 'made a big impression on Bolt, who photographed the bee.