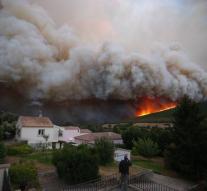 bastia - On Corsica, over 2000 hectares of nature are on fire. The police on the French island arrested a 55-year-old man who had ignited five forest fires.

That is what the French newspaper Le Monde reports.

Pictures show an impressive flame sea on the island. Hundreds of firemen try to control the fire. Nearly a thousand campers were evacuated from two campsites in Sisco and Pietracorbara in the northern part of the island.

The ANWB Alarm Center has not received any reports from Dutch who have been in trouble in Corsica.