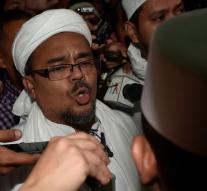 jakarta - Tens of thousands of conservative Muslims on Friday in Jakarta demonstrated against the governor of the Indonesian capital. They accuse Basuki Purnama Tjahja of insulting the Koran. He had claimed them as Christians should keep his mouth shut about Quranic verses.

' Ahok should be put firmly, '' cried the white-clad demonstrators. Ahok is the nickname of the governor. He hopes to be re-elected next year. Some political opponents try voters with religious arguments, however, to keep voting for him. Muslims should not cover non-Muslims are allowed to vote.

Ahok believes that nonsense and self quoted from the holy book of Islam to make his point. According to the people who took to the streets, he has no right there.

Many schools and businesses in Jakarta have closed their doors for fear of disturbances. Police and army have some 18 000 troops deployed to lead the protests in the right direction.

Police investigating the statements made by the governor, but the protesters are not convinced that this will lead to a case. The main question is whether Ahok is guilty of blasphemy. He himself will absolutely not. ' Why would deliberately insult the Quran, which I myself have studied? '' Ahok asked rhetorically. He added that many people from his area are Muslims.

Without support from Islamic angle governor can forget his re-election. Indonesia is the largest Muslim country in the world and most people hang a moderate Islam. Friday's protest was organized by the radical Islamic Defenders Front.\n  \n  \n   advertisement

President Joko Widodo has meanwhile called for calm. For him should just continue with some 10 million daily life in the city.