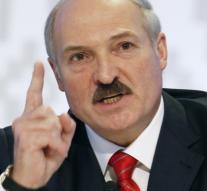 - The Belarusian leader Alexander Lukashenko on Sunday, according to the exit polls with 80 percent of the vote won the presidential election. The state news agency Belta reported shortly after closing the polling stations.

The 61 -year-old Lukashenko has been in power since 1994 in Belarus , loyal ally of Russia. Saturday hundreds of people protested against his re-election. They demanded that the president resign indient.

During dropped the last election in 2010, Lukashenko precipitate a protest against his victory by force. Hundreds of opponents of the president were then arrested.