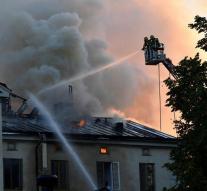 stockholm - Stockholm fire brigade every effort with a big fire in the center of the Swedish capital. The fire broke out at the Royal Institute of the Arts, but according to Swedish media threatens the Museum of Contemporary Art.

One floor of the institute summed up Wednesday by unknown cause fire. The fire department believed the fire to have already extinguished quickly, but misjudged. Elsewhere in the building, the flames flared up and soon there was a large part of the ancient building ablaze.

The fire department suspects still having to fight the whole night. They do not rule out Skeppsholmen, the island where the institute is located, must be evacuated completely.