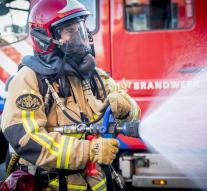 langerak - An unknown number of pigs may be at risk after a big fire broke out in a stable in Langerak (Zuid-Holland) on Thursday morning. The fire brigade is with large equipment on site.

The Lekdijk is partially closed for traffic. That is what the fire department, who is fighting with the fire, reports.

It would be about a pig house of 50 by 15 meters, but how many animals are in the stable and how it is said to them is unclear.