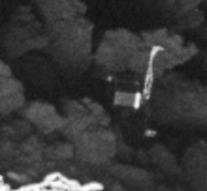 amsterdam - Philae, the little lander that landed in 2014 on a comet and then got lost, rightly again. Last Friday was the camera of Rosetta mothership orbiting around comet 67P, images where employees of the ESA discovered Philae.

Philae, which was to send messages to the Rosetta satellite, landed on the comet on November 12, 2014. That was a unique achievement, but the landing was not quite right. Philae landed in a different place than intended: in the shade. Hence the connection faltered and after two days the contact fell off. Since then, only briefly again been contacted.

The new picture shows that the tree is in a ridge and came down. He also appears to have lost the hard landing one of his legs. The shooting becomes clear why communication between Philae and Rosetta mothership went so difficult.


The Rosetta continues to rotate for a few months around the comet. On September 30 it strikes the comet. The debris and the lander will then until the end of time running with the comet around the sun.