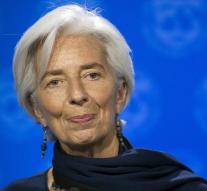 washington - President Christine Lagarde of the International Monetary Fund (IMF) continues despite its condemnation keep the support of the board. It points out that it can stay on.

Lagarde Monday in France was found guilty of negligence. French judges also decided that the sixty Lagarde gets no penalty.

In a statement late IMF that the board 'full confidence' continues to Lagarde and is looking forward to continue working with her.

Lagarde was in 2008 when French Minister of Finance and Economic Affairs did not intervene in a compensation to businessman Bernard Tapie. At the time he received 400 million euros from the state-owned bank Credit Lyonnais after a dispute over the sale of its majority stake in the German sports company Adidas.