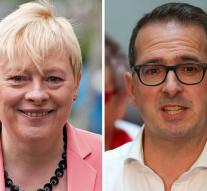 london - Owen Smith binds battle with current leader Jeremy Corbyn to the party leadership of the British Labour Party. Angela Eagle, the former spokesman for Economic Affairs, Corbyn challenged last week officially released. She has now retired in the race. Smith appeared to have more support in the group. According to Eagle, it is important that the opposition unites Corbyn.

Owen who ?, is the question that many Brits ask themselves. He is relatively unknown. Smith was last year, spokesman Social Affairs. He returned Corbyn after the referendum the back, like the majority of the group. Last weekend, he became a candidate for the leadership.

The Welsh origin Smith sees himself as a compromise candidate. He is what left of Eagle and has not been so prominent in his criticism of Corbyn. According to Smith Corbyn many good ideas, but he lacks the ability to bind large groups of voters.


Corbyn may have trouble persuading undecided voters. When supporters of the Labour Party, he is still immensely popular. In recent weeks, more than 130 000 new registered members. Which, however, must pay £ 25 extra to participate in the leadership election.

The same goes for supporters of the party. Which did not have to worry about but £ 3 last year to participate in the election. That happened en masse. Now they must also pay £ 25. That amount must be paid for this afternoon (Wednesday).

The battle for the leadership goes a long summer. Especially Smith needs to let members know him making the country. The final decision falls in late September.