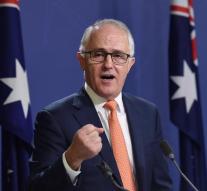 sydney - Malcolm Turnbull can presumably continue as prime minister of Australia. Although the counting of votes more than a week after the election is still in progress, has opposition Labour party now admitted that the center-right government coalition is heading for a victory.

,, It is clear that Turnbull and his coalition to form a government, '' recognized opposition leader Bill Shorten at a press conference in Melbourne. Even if the Liberal leader and his allies get no majority, they can according to Shorten form a minority government.

The coalition can probably count according to Australian media on 76 or 77 of the 150 seats in the lower house, but is currently only assured of 74 seats. The government Turnbull previously had 90 seats.