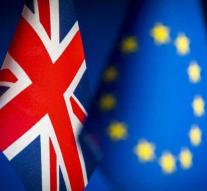 liverpool - The British opposition party Labor has emphasized that it will vote against any arrangement on the brexit that does not meet all the requirements of the party. A Labor spokesman said this Monday at the Labor Congress in Liverpool, while British Prime Minister Theresa May is trying to save her Brexit plan.

The plan was resolutely rejected by the EU, as demonstrated last week at a European summit in Salzburg. But also in the Conservative Party of May there are fervent opponents of her proposals. For example, once a meeting with Brussels has been reached, May would not get it through parliament without the support of Labor MPs.

Labor has drawn up six requirements for a possible brexit. For example, the party requires that a brexit scheme guarantees that the benefits that the country has of EU membership are not lost. And the party demands that all regions or parts of the United Kingdom agree to it.