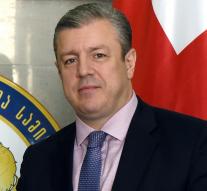 - Georgi Kvirikashvili, the new prime minister of the former Soviet state of Georgia. The parliament approved his nomination Tuesday well. Earlier, the president agreed with the recommendation.

The vote took place after Irakli Garibashvili last week unexpectedly resigned as prime minister, without giving a specific reason. Opposition politicians think to make its decision, with a decrease in the popularity of the ruling Georgian Dream coalition.

Kvirikashvili was Deputy Prime Minister and Minister of Economic Affairs when Georgian Dream party of former President Saakashvili defeated in the elections of October 2012. He was appointed foreign minister in September 2015.