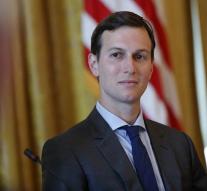 washington - The property company of Jared Kushner, the son-in-law of US President Donald Trump under a federal investigation, borrowed Deutsche Bank (DB) in October last year.

That loan came at a critical moment, reports the US newspaper The Washington Post Monday. While Kushner played a prominent role in Trump's election campaign, DB was about to settle a major criminal case with justice in New York.

In this case, DB was accused of mortgage fraud and money laundering from Russia. Both cases were brought to justice in January.

The ties between Kushner and Trump with Deutsche Bank and other financial interests of the duo are part of the investigation into Russian interference in the US elections by special prosecutor Robert Mueller.