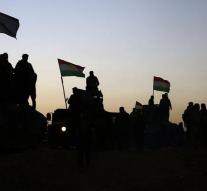 mosul - Kurdish fighters have east of the Iraqi city of Mosul a number of villages recaptured terrorist organization Islamic State. A spokesman for the peshmerga said that the Kurds will advance further towards the second city of Iraq.

The Iraqi army began Sunday night to dislodge the offensive IS Mosul, with the support of its allies, including the peshmerga. The Kurds recaptured shortly after the start of the offensive seven villages, about 40 kilometers from Mosul. A total of some 4,000 peshmerga part in the offensive.