Home / World / Kurds on the street in Cologne 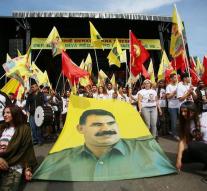 cologne - Thousands of Kurds or Germans of Kurdish origin have sat on the right bank of the Rhine in Cologne collected for a large demonstration against the policies of the Turkish President Erdogan. The Turkish president would always act more like a dictator, especially after the failed coup attempt in July. The protesters also demand the withdrawal of Turkish attacks on Kurdish Syrians militias in northern Syria.

Cologne police with an estimated thousand men on the leg to prevent the Kurdish demonstration leads to violence, for example, clashes between Kurds and Turkish nationalists.

Friday broke in Grevenbroich, northwest of Cologne, violent riots during a protest march of Kurdish students. They were according to German media clashed with police. Three policemen and three demonstrators were injured. The police arrested 77 people, mainly for assault and disturbing public order.


In eastern Turkey, meanwhile raging battle between Kurdish extremists and the Turkish armed forces continue. In clashes near the Iranian border are Friday eight soldiers slain and eight soldiers injured, reported local authorities Saturday. Thirteen fighters of the Kurdistan Workers Party (PKK) have been captured. The battle between the mostly from Iraq operating PKK and the Turkish army has flared up after more than a year ago was a failed peace process between Ankara and the PKK.