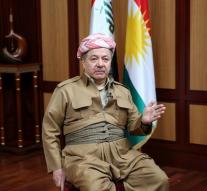 erbil - The Kurds in Iraq will remain in independence on September 25th. They hereby postpone the request from the United States to postpone the consultation.

'The date was, and remains, September 25, no change,' said Hoshiyar Zebari, adviser to regional government president Massoud Barzani. He responded to a written request from the US Secretary of State, Rex Tillerson.

According to the Americans, 'the referendum only depends on the solution of urgent matters, such as eliminating the last warriors of Islamic state from Iraq'.

Zebari announced the public consultation on independence in April. The Kurds play an important role in the fight against IS in the coalition led by the Americans.