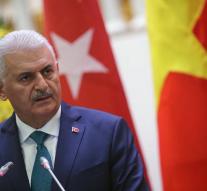 baghdad - A government delegation of the Kurdish Autonomous Region in Iraq is on its way to Baghdad to discuss the planned referendum on independence. Despite the pressure of the Iraqi government and the outside world, the referendum will happen Monday, reports a Kurdish advisor.

'We had said that we would talk to Baghdad before, during and after the referendum', let him know. The Kurds.

Especially that last country is strongly opposed to the referendum. Premier Binali Yildirim is threatening sanctions if it continues. Turkey fears that a yes voice will wake up the separatism of its own Kurdish minority.

The US also voted against the referendum.