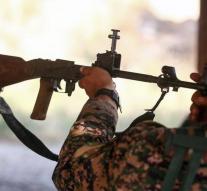 A spokesman for the Syrian-Kurdish YPG militia in the Afrin region said the Turkish army and Syrian rebels fired grenades at Tal Rifaat, Sheikh Issa and other cities north of the city of Aleppo. The bombing with 'artillery and rocket launchers' killed two people and seven were injured, he said. Kurdish warriors and allied troops struck back, after which the bombings continued.

The Syrian Observatory for Human Rights said that both parties exchanged alternatives in the area. The increasing tensions between the groups in northwest of Syria threaten to open another big front in the versatile Syrian war.