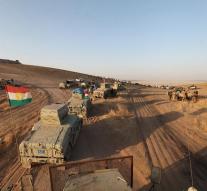 baghdad - With the conquest of several Iraqi villages that were held by Islamic State Kurdish troops have come closer Mosul Sunday. The second city of Iraq a few years ago there were still almost two million inhabitants, is already under the control of IS since June 2014. But a force where some five thousand Peshmergastrijders belong, is advancing towards the main IS stronghold.

About the fighting itself is not much known. A commander said Sunday that eleven villages were recaptured. Together with the Iraqi army, the Kurds are doing a gradual encirclement of Mosul. IS would retaliate by, inter alia, to blow up vehicles full of explosives. About casualties, however, came Sunday messages out.

Prime Minister Haider al-Abadi assumes that the reconquest of the city will be the final blow for IS in Iraq. But the United Nations are very concerned about the impending battle for the city. It could lead to,, the largest humanitarian crisis in the world, '' warned the UN envoy earlier in Iraq.