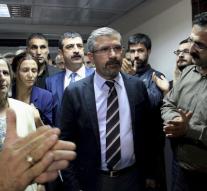 diyarbakir - Tahir Elçi, a leading Kurdish lawyer, was shot dead Saturday in southeast Turkey. He was taken by unknown persons fired at the Turkish-Kurdish Diyarbakir region. The lawyer with forty activists gave a press conference in which he pleaded for peace when the group was fired upon. Elçi was hit in the head.

Elçi was arrested in October after he had said on television that the militant Kurdish separatist PKK is not a terrorist organization. He was at liberty awaiting trial. Elçi was the president of the Bar Association in Diyarbakir province.

Tempers between Turks and Kurds run high since there came to an end in July with a two-year truce between Turkey and the PKK.