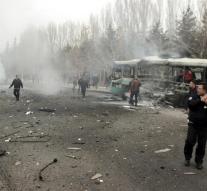 istanbul - A splinter group of the PKK, the Kurdistan Freedom Falcons (TAK), has claimed responsibility for the bomb attack Saturday on a bus with Turkish soldiers in the southern city of Kayseri. In the suicide car bomb attack came fourteen soldiers killed.

In a statement to the news agency Firat BRANCH said that the perpetrator came born in 1990 in Van province. The TAK claimed a week earlier also took responsibility for a double bombing in the Besiktas district of Istanbul, to which 36 policemen and eight civilians living.

The TAK mainly commits attacks in cities such as Istanbul and Ankara, the PKK lake in southeastern Turkey. The Turkish government does not distinguish between the two organizations.