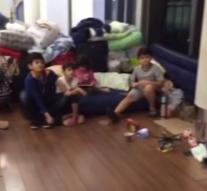 moscow - A Syrian Kurdish families from northern Iraq that the flight is beaten for IS 's been almost a month onto an airfield in Moscow. According to the Russian government their visas are invalid so they do not come in Russia, writes CNN Thursday.

A couple and their three children aged three to thirteen years, traveled to Russia in early September, because they have family there and want to build a new life. Once it was said at the customs that their passports were false. Even confirmation of the Syrian authorities offered no help. Since returning to Iraq is not an option, they remain just as long at the airport until they are allowed into the country.

For almost fifty days bivouac six relatives therefore in transit at the airport. Under pressure from the United Nations, among others received the family offered a hotel since a few days to sleep, but before that they slept on air beds on the ground. During the day they still stay at the airport. The family has a rope strung so they somewhat have a place for themselves. Above hangs a sign with " touch our stuff not to please, because we live here ".