Home / World / Kremlin was not in touch with Kushner 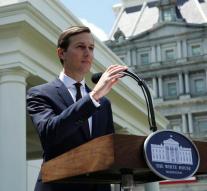 moscow - The Russian banker who spoke with Jared Kushner several times did not do that on behalf of the Kremlin. That made the Russian government know Tuesday. The American president's son-in-law was questioned in Washington on his meetings with banker Sergei Gorkov on Monday in Washington.

Kushner was questioned by the Senate in the context of the investigation into possible Russian interference with the US presidential elections last year. He agreed to meet Gorkov from the Russian state bank Vnesjeconombank last year on December 13th.

Moscow declared Tuesday that Gorkov was in the United States for a trip that had to do with its work and function. 'Of course, such a trip does not require the consent of government and such meetings, even on behalf of the Kemlin,' said a spokeswoman. It is no more than usual for someone like Gorkov to meet different people, he added.