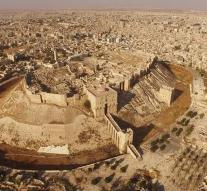 - Russia and the United States are working on an agreement for Syria among others should alleviate the plight of the torn and ravaged city of Aleppo. This is evident from a letter that a US diplomat in Beirut, Michael Ratney, sent to rebels who support the US in northern Syria.

There would be a cease-fire should come across Syria and aid sent to Aleppo. North of the city would be a zone should be established, which is not fighting anymore. That means, among other things, that the Kremlin should persuade its ally in Syria, President Bashar al-Assad them to give up the siege of Aleppo. Assad's air force and the Russians no more rebels would also harass seen in the West as not extremist opponents of Assad's regime.

What the US is doing in return for Russia, is unclear. Washington would go according assist the text of the letter by Moscow,, better coordinate the fight against al Qaeda. '