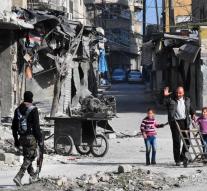 - The Syrian army in eastern Aleppo inserted a truce to evacuate some 8,000 civilians from the besieged town. This said the Russian Foreign Minister, Sergey Lavrov, on Thursday visit in Hamburg.

Lavrov said the evacuees must follow a route of about 5 kilometers to get out of the front area. He also said that on Saturday in Geneva American-Russian military consultations on the situation in Aleppo. Washington has in a statement from the White House said that it adopt a cautious attitude towards the truce mentioned by Lavrov.

The jihadists and rebels in Aleppo seem no longer able to cope with the forces of President Bashar al-Assad. It is again checked whether there can be an arrangement for eastern Aleppo. Lavrov stressed that Russia favors a solution whereby the opponents of Assad may withdraw voluntarily from the city. Citizens who want to leave may also be gone.