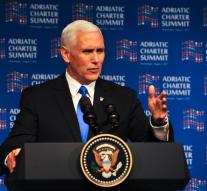 moscow - The comments by Mike Pence in Montenegro about Russian interference in the Balkans have fallen badly in the Kremlin. The US vice president accused the Russians of driving a wedge between the West and the Balkans. The Russian Ministry of Foreign Affairs said Thursday in a reply that Pence threatens stability in southern Europe and shows a Cold War mentality.

'It is sad to note that Washington is increasingly drifting away from the primitive ideology of the Cold War, completely detached from reality,' the statement said. It called on the United States to stop the taxation of Russia and its foreign policy, based on respect for allies and on willingness to international cooperation.

Pence made last Montenegro on his Eastern European tour on Wednesday. It was intended to make it clear that the US is very committed to security in the area, although President Trump does not seem to give NATO a warm heart on occasion.