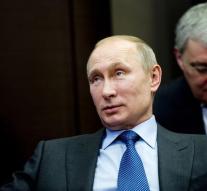 moscow - A fake successor of Russian President Vladimir Putin, apparently investigated by researchers, seems to throw strikingly high eyes in a poll. The Kremlin reacts positively: it proves that Russians trust the leadership of their leaders, a government spokesman concluded according to the press office TASS.

The independent Levada Center felt 1600 Russians and informed the participants that the fictional presidential candidate, Andrej Semenov, had the support of Putin. The imaginary Semenov received a poll of 18 percent of respondents.

Although the respondents had never heard of the non-existent politician, one in five was likely to vote for him.

According to TASS, the researchers wanted to ascertain to what extent the authority of Putin influences the voting behavior of his compatriots. The government responded to the outcome on Wednesday. 'This shows that there is an overwhelming trust in the head of state and its personnel policy,' said the spokesman.

According to the researchers, it could also be due to lack of knowledge about politics among respondents. Wanting to give a socially desirable answer is another possible explanation.