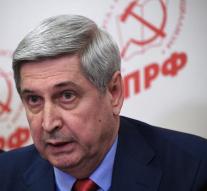 moscow - The US decision to break off the dialogue with Russia on Syria, damages the fight against jihadists in that country and demonstrates that the US government does not intend or is unable to meet its obligations in that fight. This said a spokesman for the Russian Foreign Ministry Tuesday.

So no serious pressure exerts in Russian eyes Washington from the extremist group Jabhat Fateh al-Sham. Americans want a change of regime in Damascus and close before a pact with the devil, according to Moscow.

Ivan Melnikov, the deputy chairman of the Duma, Russia's lower house, Tuesday was less negative about breaking the US-Russian dialogue on Syria. Russia is 'the anti-terrorist war in Syria' now continue without the US quibble with power to bring to an end.

US support each instance when it suits them but the terrorists in Syria that they should fight together including Russia, Melnikov complained about US policy.

Melnikov told news agency TASS that Russian air attacks by the Syrian armed forces support for a year, are very effective. The US government claims that the Russians, in particular the eastern part of the city of Aleppo random tearing and that there are 275 000 citizens under siege under gruesome circumstances. Washington argues that Russian and Syrian forces deliberately civilian targets such as hospitals attacks.

The bloody battle for Aleppo was the White House Thursday reason to break off the dialogue on a ceasefire in Syria.