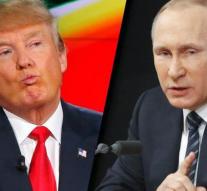 - Moscow Russia says this repeatedly denied in the run-up to the US presidential election indeed to have had contact with the campaign of Donald Trump, even though the advisers to the Republican candidate.

'There were contacts,' said Russian Deputy Foreign Minister Sergei Ryabkov Thursday, according to the Interfax news agency. 'We will of course bring through,' he said, without explaining where the contacts were made.

Russian embassy officials met with members of the campaign team of Trump, said a spokeswoman for the Russian Ministry. They called this 'normal practice. 'Also talks were requested in the campaign of Hillary Clinton, but those requests were rejected, she said.

About Trump's relations with Russia were questions raised during the campaign. Trump had praised elated about Russian President Putin. Opponents hackers from Russia had the mailboxes of employees Clinton and the leadership of the Democratic Party cracked.