Home / World / Kremlin afraid of US retreat from Afghanistan 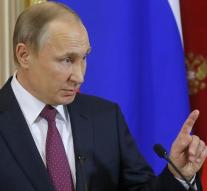 moscow - Russia fears that the new US president Donald Trump has troops from Afghanistan. The departure of the Americans from Afghanistan would worsen the situation in that country. A spokesman for the Russian Foreign Ministry said Tuesday according to Interfax news agency of 'collapse.'

Trump is a protectionist who also wants to save money in the prominent role of his country in world politics. Expensive foreign military adventures or operations takes Trump waste of money, said at least during the last campaign. According to estimates the US have been $ 4800 billion (4500 billion) spent on particularly the wars in Afghanistan and Iraq.

Afghanistan has been at war for decades. The Soviet Union invaded the country in late 1979 and left the country ten years later. The United States invaded Afghanistan in late 2001. The military intervention by the US and NATO formally ended the end of 2014, there are an estimated more than 8,000 US troops in Afghanistan.