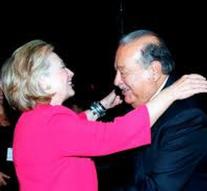 - For multi-billionaire Carlos Slim one thing is certain: if Donald Trump as president does what he promises, he will bring enormous damage to the US economy. ' Import tariffs of 35 percent? This creates unprecedented inflation, '' sneers the Mexican majority shareholder of KPN.

The telecom tycoon denies Trump's accusation that he, as a shareholder of the New York Times, Hillary Clinton supports her campaign. Slim Above wipes the floor with his isolationism.

So Trump wants the FTA NAFTA revised 35% import levy stick on Mexican exports to the US and build a wall along the Mexican border.