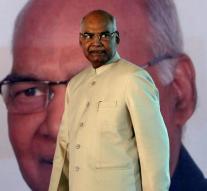 'Kovind has reached a clear majority,' said Anoop Mishra, the head of the polling station. 'I rightly call him President of India. 'The function of president in the densely populated country is predominantly ceremonial. The prime minister and his cabinet have executive power.