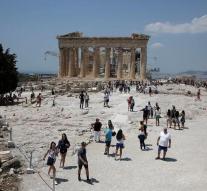 athens - In the north and middle of Greece, temperatures are suddenly clogged by about 15 degrees and there is heavy precipitation of rain and hail. Over the past few days the country struggled with a heat wave with temperatures around 40 degrees, but it has clearly disappeared in many parts of the country since Sunday.

In the middle of the country Sunday fell as much rain as normal in a whole summer, the weathermen of Greek television reported. And then it still rages. Fishermen and sailors are called on Monday not to enter the Aegean Sea. The storm with wind power 7 to 8 is expected to lie again on Tuesday.