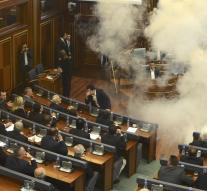 - The police in Kosovo on Monday evening hundreds of stone-throwing protesters with tear gas dispersed. The protesters demanded the release of a prominent opposition leader who had been arrested earlier in the evening .

According to the opposition Self-determination party was founder Albin Kurti arrested four days after he had thrown a smoke bomb in the parliament in protest against an agreement between Kosovo and Serbia. With that agreement is the EU membership for Serbia under Prime Minister Aleksandar Vucic one step closer.

Kosovar and Serb leaders made agreements about the powers of Serb communities in Kosovo. Also nodes were severed on issues such as telecommunications and infrastructure.