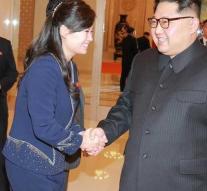 seoul - North and South Korea will be discussing the participation of the North in the Paralympic Games next week. Representatives from the neighboring countries are sitting around the table in the border area, the South Korean news agency Yonhap reports.

North Korea has previously indicated a desire to send a 150-person delegation to the Paralympic Games. That sporting event will be held next month in South Korea. Pyongyang also sent nearly 500 people to the winter games this year. These included athletes, musicians and cheerleaders.

The North Korean dictator Kim Jong-un gave the start of the so-called sports diplomacy at the start of this year. He made clear during his New Year's speech that he wanted to approach the South. Kim also warned during the same speech that the US is within reach of its nuclear weapons arsenal.