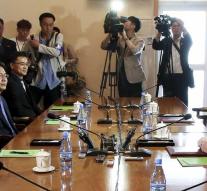 seoul - North and South Korea talked Friday about a reunion on August 15 for people who have family on the other side of the border. The conversation is a result of agreements made by the North Korean leader Kim Jong-un and the South Korean president Moon Jae-in. The Red Cross took the initiative for the meeting in North Korea.

Many of the people who have family in the other Korea have passed the seventy and therefore this can be a last chance that they can still see each other. We also check whether family members can make video calls with each other again and write letters to each other.

Whether North Korea has demanded that twelve women who defected in 2016 to South Korea are extradited is not known. That was rather a condition for making the reunion possible.