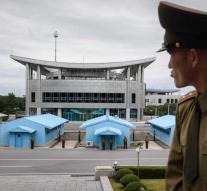 The intention of the agency is to improve the communication between the countries. All border matters are also arranged at the office. According to the South Korean Ministry for Unity, it is a new step in reducing tensions.