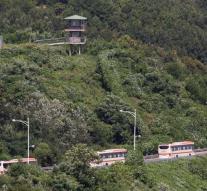 seoul - South Korea closes about a dozen guard posts in the Korean demilitarized zone. According to minister Song Young-moo (Defense) at the end of last month agreements were made with neighboring North Korea, reports the newspaper Chosun Ilbo. It is a test.

Song stated that North Korea is also withdrawing troops from a number of posts. 'The two parties will leave all the guard posts that are less than a kilometer apart,' the minister said to a parliamentary committee. The chairman of that committee warned that the withdrawal must be proportional. North Korea has more guard posts at the front than the South.

The so-called demilitarized zone between neighboring countries is about 4 kilometers wide. It is a buffer zone between the countries, which formally never made peace after the Korean war of the fifties. That armed conflict ended in a truce. The relationship between Pyongyang and Seoul has improved since the beginning of the year.