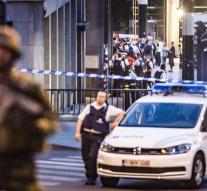 brussels - A Tunisian companion of the terrorist Salah Abdeslam is officially suspected of participating in the terror cell that committed the attacks in Brussels in March 2016. The federal prosecutor's office in Belgium says that 24-year-old Sofien Ayari has been indicted. Abdeslam may wait for the same fate.

Abdeslam and Ayari were both sentenced to twenty years in prison in April for a murder attempt on agents. They shot a week before the attacks from a house in the Brussels municipality of Vorst on a Belgian-French police team, in which some officers were injured. The Brussels court considers it a terrorist act.

When the lawsuit about the attacks of 22 March 2016 begins is not yet decided. Three suicide bombers then blew up in a subway in Brussels and at the airport in Zaventem. 32 people died.

Abdeslam is the only surviving terrorist in the November 2015 attacks in Paris.