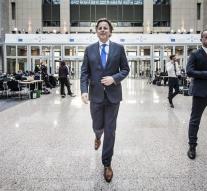 baghdad - If want to reach the Iraqi government long-term peace in the country, they have plenty of bets IS after defeating terror group on reconstruction and reconciliation. Only by ensuring that the population stability, can be prevented from getting up new extremist groups.

The Iraqi army tries with international support at this time IS expel from Mosul, the last major stronghold of the terrorist group in Iraq. Previously all Ramadi, Tikrit and Fallujah liberated.

' The military defeat of ISIS is currently crucial, but can only be sustainable if it also focuses on stabilization, reconstruction and reconciliation, including administrative and economic reforms, 'he said in a statement. ' Change must come from within especially the Iraqi government's turn. '

About 150 Dutch soldiers to help in Iraq. They train as soldiers, but troops will soon assist in the forefront and counseling. But the Dutch do not participate in battles.

Koenders traveling through the area with his Belgian and Luxembourg counterparts Didier Reynders and Jean Asselborn. Previously they were in Jordan.