Home / World / Koenders: Suu Kyi does not do enough for Rohingya 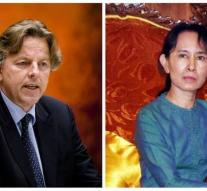 the hague - Premier Aung San Suu Kyi of Myanmar does not do enough for the Rohingya minority in her country. That is what Minister Bert Koenders believes in foreign affairs.

More than 370,000 Rohingya flew to Bangladesh recently to escape the violence of the army.

'I think she must be clear about this,' Koenders said. The Nobel laureate winner has been in the field since the outbreak of violence last month. Last week, she said there is a lot of fake news about the violence in the western state of Rakhine.

However, according to UN Human Rights Commissioner Zeid Council Al Hussein, it is a 'classic example of ethnic cleansing. '

Koenders speaks of a 'dramatic situation. 'The Rohingya are an Islamic minority in the predominantly Buddhist Myanmar. Koenders believes that the United Nations should send a committee to Myanmar to investigate recent violence.