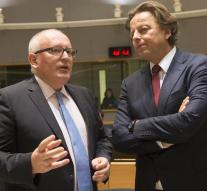 brussels - Minister Bert Koenders (Foreign Affairs) expects 'one month of negotiations' on the brexit. 'We have to make progress now, it all takes very long. But nothing is impossible, 'he said in Brussels. Monday afternoon, the EU and the United Kingdom resume the talks.

At the end of October, EU leaders will decide at a Brussels summit whether there will be 'sufficient progress: the main issues have been reached to discuss the future (trade) relationship. It is of great importance to the Netherlands.

According to Koenders, who prepares the summit with his European colleagues, British Prime Minister Theresa May has given more 'starting points' in a speech last week. For example, it proposes a transition period of approximately two years.

Also about the final settlement, she tried to reassure the EU without losing what she understood under British financial obligations. 'That's a point,' Koenders said. He also considers it 'completely unclear' how the rights of the citizens are guaranteed after brexit.