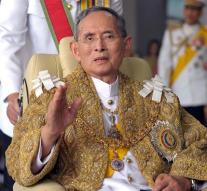 bangkok - Thai King Bhumibol ' was a stabilizing factor in politically turbulent times '' in his country, said Minister Bert Koenders (Foreign Affairs) Thursday in response to the death of the monarch. Koenders happens in the Thai capital Bangkok for a meeting of the Association of Southeast Asian Nations (ASEAN) and the European Union.

The king was, according to the minister symbolize the unity among the Thai people and had great influence behind the scenes. ' The next few days are very important given the political situation in the country and the succession of the king. 'Bhumibol was seventy years on the throne.