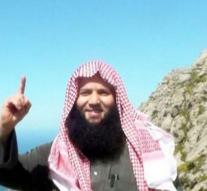 gouda - The Netherlands-based salafist Imam Tarik Chadlioui, arrested in The Netherlands, was arrested in Birmingham, England. He is handed over to Spain in connection with a terrorist investigation. The imam, better known as Tarik ibn Ali, has a Belgian passport, but was often in the Netherlands to collect money.

In January he was still in Gouda to recruit funds for a megamoskee. His questions are asked about his coming. The Contact Muslim Government recommended mosques a few years ago to no longer invite Chadlioui. He was associated with the radical group Sharia4Belgium.

His name was also mentioned in connection with the attacks in Paris. He or his group would have radicalized Omar Mostefai, one of the attackers in the Bataclan. In the concert hall, 89 deaths fell in 2015.

Spain suspects Chadlioui of propaganda companies for IS, reports the British newspaper Daily Mail. Through Youtube, imam sent many images into the world. To see how the spirit in the swimming pool floats on an inflatable band, how he stands behind the barbecue and gives his children a horse riding lesson. But also how he puts a sermon on a children's playground.